The 2018-19 Spotlight Series features 27 professional performances in music, theatre, comedy and dance — from a wide range of genres. 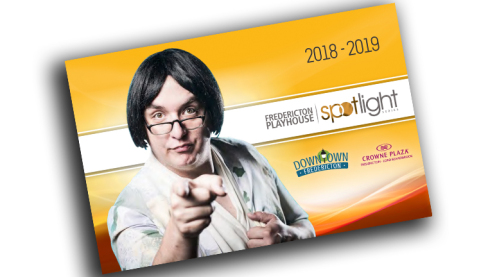 “Our mission is to deliver programs, services and facilities to provide our community with enriching live performance experiences, and the Spotlight Series plays an important role in achieving that goal,” says Tim Yerxa, executive director of the Fredericton Playhouse.

“We consider our organization to be a cornerstone of our community, and we believe the performing arts experiences we provide help to enhance the lives of people living in the Greater Fredericton region. Personally, I like to think that we are helping make ‘the good life’ even better for those who live here.”

The Spotlight series invites some of the most exciting artists touring today to the Playhouse stage. This year we have hilarious comedy performances, large-scale orchestra performances, innovative dance shows, family-friendly acts, musicians from close to home and around the world, compelling theatre pieces and much more.

Comedy fans will be delighted by God is a Scottish Drag Queen, a one-man performance by award-winning Canadian comedian Mike Delamont in which God, dressed in a floral power suit, comes down to Earth to skewer everything from Justin Beiber to the Pope.

Thank You for Being a Friend brings the classic dialogue, razor sharp gags and taboo-breaking stories of The Golden Girls to life, performed with (yes) puppets.

U.K.-born, Saint John-based comedian James Mullinger makes his long-awaited debut solo stand up performance at the Playhouse, and it promises to be a memorable one, full of brand new material as well as some classic routines.

There are several orchestral performances in the series, including the Manitoba Chamber Orchestra, a renowned touring orchestra, joined by cellist Ariel Barnes.

Playhouse favourite, Canada’s Ballet Jörgen returns with Coppélia, one of the world’s oldest surviving ballets — and one of the best known comedic ballets.

The lineup includes a number of other acclaimed dance companies, including New York’s Ailey II, renowned for merging the spirit and energy of America’s best young dance talent with the passion and creative vision of today’s most outstanding emerging choreographers.

Motus O Dance Theatre will perform Prisoner of Tehran, a synthesis of dance, theatre and storytelling featuring Marina Nemat, who was held as a political prisoner for two years.

The dance program also includes Gadfly, an innovative company focused on the junction where urban dance, jazz and contemporary styles collide and tune together.

Families can look forward to a variety of shows this season, including Tomáš Kubínek, a comic genius, virtuoso vaudevillian and all-around charmer who provides utterly joyous experiences audiences will remember for a lifetime.

Canadian family band Leahy is one of the country’s most highly regarded progressive folk-roots with their pulse-raising rhythms, compelling storytelling and infectious melodies.

The Playhouse will once again present its Kidstage Series, and is pleased to announce that all performances this season will once again have Pay-What-You-Will ticketing. The series features three shows: DuffleBag Theatre’s Snow White; Circus Incognitus by eclectic clown, juggler, balancing artist and poet Jamie Adkins; and beloved family entertainers Sharon & Bram.

Fans of audience favourite Classic Albums Live will enjoy two performances this season from these skilled musicians, with Led Zeppelin: Houses of the Holy and Queen: A Night at the Opera.

Lloyd Spiegel, an artist at the forefront of Australia’s blues scene, and a rising star in North America will take the stage

Singer, songwriter, multi-instrumentalist and producer Royal Wood has established himself as a true musical talent, who will wow audiences with his constantly evolving sound.

Canadian singer-songwriters Luke McMaster and Ian Sherwood will join forces for a special double bill concert that highlights both of their talents.

And beloved Playhouse duo Fortunate Ones is back in support of their upcoming album, bringing anthemic melodies to life with guitar, accordion, piano and percussion.

The Spotlight Series offers a number of compelling theatre performances like Huff, a wrenching yet comic tale by playwright Cliff Cardinal about a family caught in a torrent of solvent abuse.

Chase Padgett will return following his wildly successful performance of 6 Guitars in 2016 with Nashville Hurricane, a curious tale full of stories and songs about a mysterious acoustic guitarist who appeared out of nowhere 40 years ago, conquered the music industry, and disappeared without a trace.

Storytelling champion Stéphanie Morin-Robert performs a feat of riveting comedy in Blindside, a one-woman play about her life as a feisty seven-year-old who wields her glass eye as a superpower.

In addition to the Spotlight Series, the Playhouse has announced a special presentation of Evil Dead The Musical. This hit off-Broadway show takes all the elements of the cult classic Evil Dead film series and combines them for one of the craziest, funniest and bloodiest theatre experiences of all time.

This laugh-out-loud performance has become a cult sensation of its own, and will be enjoyed by both fans of the series and those who have never seen it before, thanks to its jokes, cheesy effects, blood, and truly impressive musical numbers.

Just in time for the holidays, The Celtic Tenors bring their world-class act to the Playhouse for a Christmas show featuring classic carols and beloved Irish holiday favourites.

A Christmas Time with The Ennis Sisters highlights this Atlantic Canadian trio’s buttery harmonies, as they perform tunes that evoke the spirit of a Newfoundland Christmas.

“We’re thrilled that our Spotlight membership program has received such a high level of participation over the years,” says Yerxa.

“With the purchase of one membership, patrons can buy up to six discounted tickets per performance, which puts money back in their pockets right away.”

Spotlight Memberships are on sale now for our current members until June 22, after which we will still continue to receive renewals — but will also be processing new memberships. Full priced tickets go on sale July 27.

For more detailed information on 2018-19 Spotlight Series performances check out our season guide or contact the box office.

← Employment Opportunity: Communications Director
How to Deal with Cyberbullying and Substance Abuse →