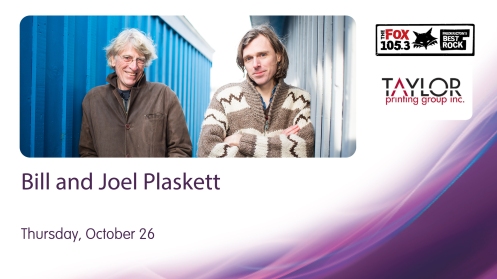 Award-winning musician Joel Plaskett will join forces with Bill Plaskett for a must-see performance at the Fredericton Playhouse on Thursday, October 26 at 7:30 p.m. Halifax-based artist Joel Plaskett has gained great acclaim as a multiple Juno-winning songwriter, selling out clubs and concert halls from coast to coast. For his latest project, he’s sharing the spotlight with his earliest musical influence – his father, Bill Plaskett. Their album Solidarity, released in February, is the first musical collaboration between father and son. Solidarity is a powerful collection of original and traditional songs reflecting the duo’s individual journeys and personal politics. This performance promises to be full of strong guitar playing and thoughtful, accessible music, featuring everything from contemplative love songs, to folk-based political tunes, with a touch of rockabilly country blues in between. Tickets for Bill and Joel Plaskett are available through the Fredericton Playhouse box office by calling 458-8344 or online at www.theplayhouse.ca.