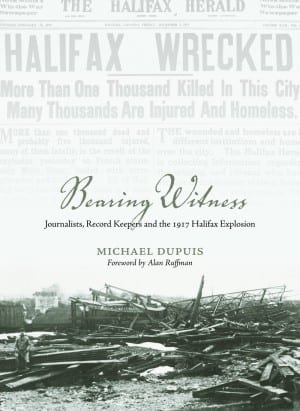 December 6, 2017, signals the 100th anniversary of the Halifax Explosion, Canada’s worst Maritime tragedy to date. In mere seconds, a large portion of Halifax’s North End and waterfront were obliterated when the damaged munitions ship Mont Blanc exploded, killing 2,000 people and injuring thousands more. Many were left homeless as the force of the blast levelled the poorly-constructed houses, and fires consumed the wooden debris and trapped bodies.

“The full extent of the calamity will not be known for many months – perhaps never.”

A retired history teacher, writer, and author, Michael Dupuis concentrates his research on the role of journalists on the ground immediately after the explosion in Bearing Witness (2017, Fernwood Publishing). Mr Dupuis has scrupulously gathered all published accounts of the explosion and its aftermath from Canadian as well as American sources, primarily the all-important newspapers of the day. As soon as railway and telegraph services were restored, journalists poured into the city from east coast cities as well as Boston Massachusetts and their reports streamed out on the wires. Mr Dupuis incorporates introductory notes, images, and photographs throughout this studious work which reproduces all existing accounts of the event. While this necessarily leads to repetition of the main events involving the blast, each journalist offers distinct details such as eyewitness accounts, interviews and personal observances of the devastation.

Distinctive is the unique eye-witness account of Archibald MacMechan, who would become the Official Historian of the Halifax Disaster. When the Explosion occurred, Mr MacMechan was sitting in his Halifax home reading the newspaper. His house was damaged, but none of the occupants was injured. His reprinted account takes up approximately five pages in Bearing Witness, it being a chronicle that is thorough, compassionate and well-written, giving the reader of the day an idea (if that were possible) of the devastation and its impact on the city. He concludes:

“What happened on December sixth is the worst calamity that ever befell Halifax. The material damage is estimated at thirty millions. The physical suffering, the mental anguish from wounds, blinding, crippling, bereavement, cannot be reckoned by human calculation.”

This is a valuable book for historians (armchair or otherwise) to have on their shelf. A scholarly work that befits the quality of the titles produced by Nova Scotia’s Fernwood Publishing, Bearing Witness includes Appendices, Notes, References, and an Index. I have added it to the 2017 longlist for Non-Fiction, History for a “Very Best!” Book Award.

The post Book Review: “Bearing Witness: Journalists, Record Keepers and the 1917 Halifax Explosion” by Michael Dupuis appeared first on Giver on the River.

← 2017 Recipients of the Order of New Brunswick
Miramichi Fishing Report for Thursday, August 24, 2017 →