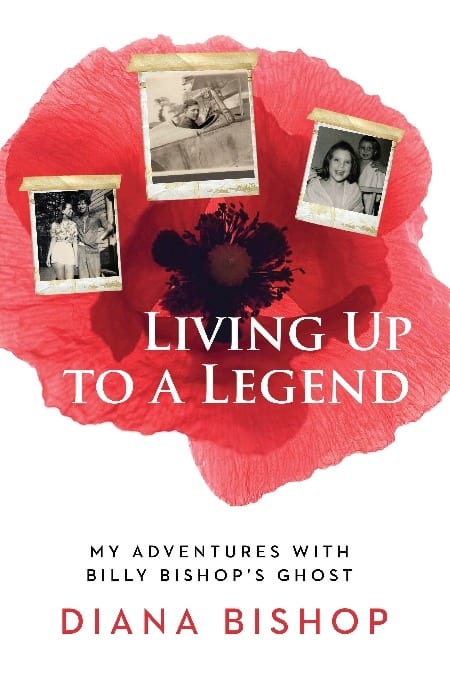 Subtitled My Adventures with Billy Bishop’s Ghost, Diana Bishop’s memoirs of her grandfather, WWI Canadian flying ace Billy Bishop, is an insightful, moving look at growing up in the shadow of a legend. Living Up to a Legend (Dundurn, 2017) is full of important moments and keen recollections of a life lived not only with Billy’s ghost but with a father (Arthur Bishop) who was a WWII RCAF officer who flew Spitfires and was popular in his own right.

Living Up to a Legend is definitely a worthy read.

While Billy died when Diana was only six years old, his “ghost” was everywhere, whether it was feeling important in front of schoolmates as she displayed his medals or the expectations of her as she grew, the stories of Billy and the larger-than-life image he represented filled Diana’s world:

“Billy was my centre of gravity and I counted on all the stuff I knew about him not to change. I needed to feel that something in my life would always be what I knew it to be.”

Billy’s only son Arthur wasn’t the easiest man to live with as a father or to understand at the time. He would come home from work and drink Scotch in front of the TV until his long-suffering wife Priscilla brought him his dinner on a tray. After eating, he would stagger up the stairs to bed. Only then could Diana, her mother and her brother have their supper and enjoy each other’s company or watch TV. Diana and her family had to walk on eggshells around Arthur because he could be temperamental (today we might say Arthur suffered from PTSD). The family even had a term called “Billy Bishop Syndrome” and often wondered if their father suffered from it:

“One was afflicted with Billy Bishop Syndrome…when feeling the pressure of that larger-than-life image of a famous relative, the one everyone was always talking about with admiration. The relative had set the bar so high….it meant you just couldn’t be good, you had to great!”

Living Up to a Legend is filled with reminisces of a time when one threw parties with lots of alcohol, whether at home in Toronto or at the family cottage in the Muskokas (Arthur would nail a huge picture of a martini glass to a hydro pole when they had arrived) and while Diana’s grandparents had money (she was related to the Eaton’s), Diana’s family only had just enough to get by, primarily due to Arthur’s capricious business ventures. Most revealing is her relationship with Arthur in his final years when she reluctantly puts him in a senior’s home and deals with his increasing dementia while trying to live her own life. With black & white family photos filling out the account, Living Up to a Legend is definitely a worthy read, particularly so for the uncommon circumstances the author was raised under, and how she eventually became her own successful person, coming to terms with both Billy’s ghost and Arthur’s conflicted form of fatherhood.

The post Book Review: “Living Up to a Legend” by Diana Bishop appeared first on Giver on the River.