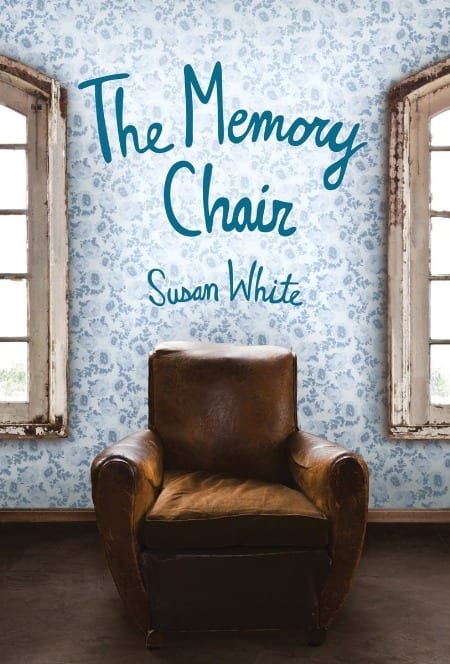 I must admit to a certain guilty pleasure that comes from reading and reviewing Young Adult (YA) novels. First of all, they are an “easy” read; the stories are often straightforward, devoid of gratuitous sex, profanity and violence (in most cases) and the author’s message is clear. Secondly, it makes me see things through the eyes of a young person, often taking me back in time to my own adolescent years. This was the case with New Brunswick author Susan White’s The Memory Chair (2015, Acorn Press), which was recently chosen by the Canadian Children’s Book Centre as one of their Best Books for Kids and Teens.

It is the story of Betony, a thirteen-year-old girl who is often dragged along by her father when he visits Gram, Betony’s great-grandmother. The house is old and stuffy and is way too warm for her, as a wood fire is always burning in the stove. This was the familiar part for me: I usually went along with my father on Saturday mornings when he would visit my maternal grandmother and help her out with odd jobs she needed doing. Her house was old and old-smelling. She was old too (1892-1969, so I was only 8 years old when she passed away at age 77) and kinda scary to a young fellow like me. However, she always had some kind of baked goods available and she always gave me “coppers” as the penny was commonly known as then. I usually looked through the local Saturday paper as Dad puttered around. I don’t recall conversing much with her, but then I was always an introvert and it was still in the day when children were seen and not heard, so I can well identify with Betony’s situation.

However, it is her Gram’s old chair that changes everything for Betony. Rather, it is what happens when Betony curls up in the chair and drifts off to sleep: she dreams through the young eyes of her Gram, getting glimpses of her thoughts at critical moments in her life. It’s not like the chair has any “magical” qualities; it appears to be more of a catalyst for sleep and meditation, etc. What Betony sees is quite vivid and it causes her to become more interested in her Gram’s life since the visions raise questions in her mind. One in particular brings a family skeleton out of the closet, causing Betony to set out on quest to right a past wrong that has haunted her mother’s family for years.

The primary message of The Memory Chair is getting to know and understand the elderly better. Once Betony gets to know her Gram better, she becomes her friend and learns many skills: quilting, cooking, gardening and so on which she finds more interesting and enjoyable than other typical diversions such as TV and electronic devices. It is this closeness that eventually causes Gram to open up to her about the dark, shameful secret in her past.

A great read for a young person, male or female. Those who are a wee bit older will enjoy it too!

Susan White was born in New Brunswick and moved from one New Brunswick city to another. As a teenager her family moved to the Kingston Peninsula and she only left long enough to earn her BA and BEd at St. Thomas University in Fredericton. Settling on the peninsula, she and her husband raised four children and ran a small farm while she taught elementary school. Since retiring she is grateful to now have the time to work on her writing and the freedom to regularly visit her new granddaughter in Alberta.

2 Responses to Book Review: “The Memory Chair” by Susan White