2017 marks an important year for Canada, as we celebrate the 150th anniversary of confederation. The Fredericton Playhouse is participating in this year-long celebration with our Canada 150 Performance Series. We see this anniversary as a pivotal milestone for our country – it’s an opportunity to connect with our past, celebrate who we are today, honour our exceptional achievements and build a legacy for tomorrow. With that in mind, we wanted to present a special multidisciplinary series this fall, consisting of four shows that reflect Canada’s vibrant performing arts landscape. We’re excited to share these performances with our patrons, and we’re also thrilled to announce that, thanks to the support of our funding partners, all tickets in the series will be $18.67 to mark the year of confederation. The Canada 150 Performance Series kicks off later this month, with a performance by Kaha:wi Dance Theatre. One of Canada’s leading contemporary dance companies, Kaha:wi combines indigenous and contemporary dance in its performances, and we’re lucky to have the company return to the Playhouse for a third time with a piece that’s new to Fredericton. 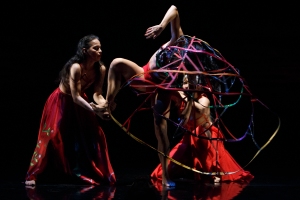 Titled Re-Quickening, this performance will celebrate the female voice and body. The piece touches on difficult, yet important themes, including the dislocation of indigenous people from their land, the history of violence against indigenous women, residential schools and more. In October, we’re looking forward to the return of theatre and media company FIXT POINT. Back in 2014, FIXT POINT brought their storymobile to Fredericton, and in collaboration with the Playhouse, they gathered stories through interviews with community stakeholders, local heroes, business owners and residents. The result of this work was The Tale of a Town – Fredericton, which was presented to the community through a special performance installation in a downtown storefront. This time, FIXT POINT will present The Tale of a Town – Canada on the Playhouse stage, featuring a local choir led by choral director Michael Doherty, along with stories from main streets and downtowns across Canada. This multimedia performance will travel all across the country, and it’s a great opportunity to celebrate Canada’s diversity as we mark our 150th anniversary. Coming up in November, we’ll welcome the Fredericton Symphony Orchestra to our stage for a special performance of a musical score by Laura Rossi, presented in conjunction with the 1916 documentary film The Battle of the Somme. The score was composed in 2006 to commemorate the 90th anniversary of the groundbreaking film, and the performance by the orchestra promises to give greater meaning and depth to the wartime footage featured in the documentary, which captures one of the key battles of the First World War. The Battle of the Somme is the first feature-length documentary film record of combat, and has had a major influence on the past 100 years of documentary filmmaking. We’re pleased to also be able to present this performance as part of our School Field Trips series. High school students will be invited to enhance their historical awareness through the experience and thanks to the support of our funding partners, this show will be free of charge. The final performance in the Canada 150 Performance Series is a special double bill concert coming up in November, featuring Breabach and Old Man Luedecke. Five-piece Scottish band Breabach performs a thrilling brand of contemporary folk music, and their performance will embody the Scottish sound that greatly influences music from the East Coast. They’ll be joined by Old Man Luedecke, a Chester, N.S.-based musician known for his lyrical flair and mix of folk, bluegrass and pop music. This returning favourite always impresses Playhouse audiences with his enthralling stories and songs. In addition to these performances, the Playhouse will present several Experience More! enrichment activities associated with the series, including a contemporary indigenous dance primer, a conversation with Kaha:wi Dance Theatre Artistic Director Santee Smith, and a scotch whisky tasting with Frank Scott. I hope you’ll partake in our Canada 150 Performance Series, and join us in celebrating this milestone anniversary by taking in performances reflective of our country’s exciting performing arts scene. Tim Yerxa is the Executive Director of the Fredericton Playhouse.