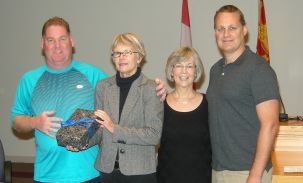 Since his brain tumour diagnosis in 2007, Fredericton City Councillor David Kelly has been a linchpin for the brain tumour community in Fredericton and across Canada. With his passion and determination, he has helped and supported countless patients and their families on their very personal journeys with this disease. Because of his wide and deep impact, David is one of this year’s Volunteers of Distinction for Brain Tumour Foundation of Canada.

David’s commitment to supporting the 27 Canadians diagnosed every day with a brain tumour is strong. One example is his support for the Fredericton Brain Tumour Support Group, which began in 2009. David has been to nearly every single meeting in these last five years. It’s incredible.  And he contributes to the group in ways to help everyone who attends: he is very candid about the impact his brain tumour has had on his life and his attitude opens the door for open and honest communication among others.

“This means a lot to me,” said Coun. Kelly.  “Thank you to everyone for all they have done over the past few years for me and my family.”

Long before the Support Group started, David was a champion for the cause. He has been an integral part of the annual Spring Sprint walk/fun-run, serving on the volunteer committee since it began in 2003, helping to spread critical awareness about the need to raise funds.

He’s also given his time for other fundraising and awareness raising events like an Art Auction, a wrestling match, displays at the farmer’s market and serving on the Fundraising Committee that reports to the organization’s Board of Directors. Finally, there is his van, which proudly features Brain Tumour Foundation of Canada’s logo and contact information – helping to spread critical awareness everywhere he goes.

“Through David’s contribution, many people in this community and across Canada know about the services available to them through the Brain Tumour Foundation of Canada,” said Caroline Walker, convenor for the organization’s Fredericton Support Group. “Ultimately, they know they are not alone.”

“I was honoured to be involved in this recognition event for David,” said Fredericton Mayor Brad Woodside.  “This is simply one small part of the contribution that he and his family have made to the City of Fredericton.”

David was first elected to Fredericton City Council in October 1999 and is currently serving his fifth term as City Councillor after being re-elected in May 2012.

He is a licensed insurance appraiser by profession, a job he has done since 1986.

As a City Councillor he is Vice-Chair of the City’s Transportation Committee, and is also a member of the Community Services Committee and the Public Safety & Environment Committee.

In addition to his support for the Brain Tumour Foundation of Canada, he is Chair of the Canadian Tire “Jump Start” program, Vice-Chair of Jobs Unlimited Fredericton and board member of the Capital Region NB Crime Stoppers, Pine Grove Foundation, and Fredericton Non-Profit Housing Corporation. Councillor Kelly is also affiliated with the Canadian Red Cross, and the Epsilon Y’s Men Club.

David and his wife Kim have one daughter named Mallory.