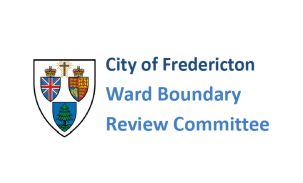 Fredericton’s Ward Boundary Review Committee has released the final draft of the proposed new electoral map of the City of Fredericton to public scrutiny. The map, which can be viewed at www.fredericton.ca/wardboundaryreview, proposes changes to the downtown/hill ward boundaries. The ward boundaries for the north side of the city remained unchanged.

If adopted, the new ward map will be used for the municipal election of May 2016.

“The Committee appreciated the input from citizens who attended the three open houses or wrote letters of concern,” said Pam Campbell, member and spokesperson for the committee. “Each was reviewed in preparing the final draft.”

The Committee is welcoming formal submissions regarding the proposed map, which was revised due to recent public input. Sessions will be held on December 11 to hear any oral submissions starting at 2:30 pm. Notification of desire to submit an oral submission must be made by 4:30 pm on December 9. Written submissions must be submitted by the same date and time. Submissions may be emailed to wardboundaryreview@fredericton.ca or mailed/delivered to the Ward Boundary Review Committee, 397 Queen Street, Fredericton, NB E3B 1B5.

If you are interested in more information about making a submission, call 506-460-2075.

“The proposed new ward map could shape municipal government in Fredericton for the next decade,” said Campbell.  “The committee has worked hard to achieve the guiding principles outlined by City Council and balance the concerns expressed by residents.”

The committee will submit its recommendations to the City Council on January 5, 2015.