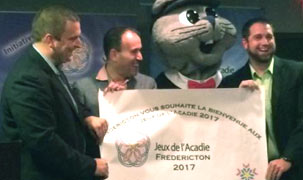 The City of Fredericton will host the 38e Finale des Jeux de l’Acadie in June 2017, the first time the city has attracted the event in 17 years. It was announced that the  will come to the region at the Société des jeux de l’Acadie AGM and awards banquet held in Charlottetown, PEI on November 22.

The  includes sporting and cultural events specifically aimed at Acadian and Francophone youths from across the Atlantic provinces. A date for the 2017 event has not yet been determined, but it is expected to be held toward the end of June.

“The City of Fredericton is very excited to have been awarded the Jeux de l’Acadie in 2017,” said Deputy Mayor Eric Megarity. “We have partnered with the Centre Communautaire Sainte-Anne in the past and are very confident that the partnership will allow Fredericton to showcase and celebrate its Francophone community with this marquee event. Sporting and cultural events of this magnitude continue to promote Fredericton as a Sport Tourism destination.”

“Having the Jeux de l’Acadie in Fredericton again after 17 years is a unique opportunity to bring all residents of the provincial capital region together. For the young participants, it is an unforgettable life experience and an occasion that creates a feeling of collective pride and belonging to the Francophone community.” noted Centre Communautaire Sainte-Anne President Jean-Luc Benoit. “Just like the Finale des Jeux de l’Acadie 2000, this is another example of close cooperation between the City of Fredericton and the Centre communautaire Sainte-Anne. We are pleased with the commitment of the city and the city council to the Francophone community of the capital region and we would like to thank them for their unfailing support.”