MIRAMICHI – Salmon and a few grilse are moving slowly into the system with a few each day, but no run to speak of. There are also good numbers of shad now in the river. Gradually, the striped bass are dispersing from the spawning grounds to other rivers and bays in the Gulf region. The MSA have been busy this week doing fry stockings in various parts of the system.

W. W. Doak and Sons in Doaktown said angling was quieter than last week, but some fish were still being caught. There were some salmon reported in the Upper Blackville area, including a couple of grilse on Tuesday. Over all it was neither dead nor gang busters. The water was getting low on some of the tributaries and in the Doaktown-Boiestown area. So a raise in those parts would be welcome. The temperature was good with most days finishing in the 68-70 degrees Fahrenheit. Flies of choice were White-tailed Green Machines, Glitter Bears, Butterflies, Shady Ladies and Undertakers on nos. 6 & 8 hooks.

Andrew Anthony of Ledges Inn in Doaktown and Mountain Channel in the Rapids area said anglers were getting into a few salmon and were loosing a fair number. They had landed four salmon and lost several others. Salmon were seen moving through Mountain Channel on Monday. Water levels were fishable in Doaktown and above, but getting low (about 6 to 8 inches from summer low). A nice raise would be welcome. Flies of choice were Jones Specials, Black Ghosts, Butterflies, Smurfs and White-tailed Green Machines on nos. 6 & 8 hooks with no. 4 better at Mountain Channel.

Herb Barry Sr. of Herb’s Fly Shop on the Station Road in Blackville said angling there was a little better than last week with a few being caught, but in no great numbers. He’d heard of four salmon caught and a few lost, but there were no grilse reports yet. The water was getting low and warming. Flies of choice were Green Rats, White-tailed Green Machines, Green-butt Bear Hairs and Undertakers on no. 6 hooks.

Curtis Miramichi River Outfitting in Blackville said fishing had picked up a bit from last week. There were hooking some, but in no great numbers. They had reports of 10 salmon over four days, and an odd grilse. Canoeing was good and they had canoes for rent. The water was an acceptable level, but getting down. Flies of choice were White-tailed Green Machines with Krystal Flash.

Jim Laws of Miramichi Hunting and Fishing in Newcastle, Miramichi reported a few salmon and an odd grilse being hooked. The striped bass fishing was basically over until the fall, although down river they were doing well. The water was dropping. Generally, there were not a lot of anglers out. Flies of choice were White-tailed Green Machines and Black Ghosts on no. 6 hooks.

Syd Matchett of Trout Brook Fly Shop on the Northwest Miramichi said angling was improving further up river. Ross Farquhar picked up a 10 and a 15 pound salmon on the Crawford Crown Reserve Stretch on June 15. Peter Nevin’s Crew was skunked at the Stoney Brook Stretch, but Will Doyle followed them and caught a salmon and two grilse. Will said he’d gladly serve as a guide for Nevin on his next trip so he could catch some fish. There were two grilse hooked Monday on the lower part of the Northwest. The water was getting low and could use a nice raise. Syd had heard that Jim Lorentz had caught a salmon on the Little Southwest on Friday. Flies of choice were Shady Ladies, Yellow Butterflies, White-tailed Green Machines and Black Ghosts.

Debbie Norton of Upper Oxbow Outdoor Adventures on the Little Southwest Miramichi said Ben Emery of Old Orchard Beach, Maine hooked a 12-pound salmon last Friday. It was his first time fishing on the Miramichi. The water was seasonally low, more like mid-July than mid June, but still a good fishing level. Striped bass were fizzling out on the Miramichi, but Norton was talking to someone in Caraquet, NB who said it was unreal there. Flies of choice were White-tailed Green Machines.

With more fish coming into the system each day chances are getting better for success, so get out and “on the water”.

Thought for the Week: “The trout do not rise in the cemetery, so you better do your fishing while you are able.” Anonymous

Both Doug Underhill and Bryant Freeman will be at Cabela’s on Saturday June 24 between 11 a.m. and 1 p.m. to sign copies of Doug’s new book BRYANT FREEMAN: ALL THINGS FISHING.  Bryant will also be tying some of his famous Carter’s Bugs.  So join them and pick up some pieces of NB’s fishing lore, and probably a few stories as well.  Fly tyer Elaine Gray will be Cabela’s host and probably tie a few flies as well.  Hope to see you there! 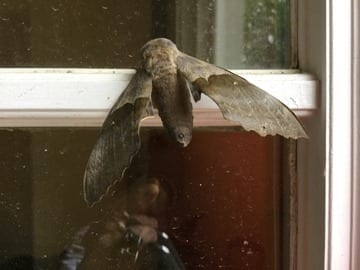 The post Miramichi Fishing Report for Thursday, June 22, 2017 appeared first on Giver on the River.