On Saturday, October 15, another salmon angling season will be finished for the year.  The few exceptions that are still open are the Bartibog, Burnt Church and Tabusintac Rivers which close October 29.

Striped bass can still be fished with the final retention period now running to October 31, during which time each person is allowed to keep one fish per day, with a possession limit of one between 50-65 centimeters.  The length is measured in a straight line from the tip of the nose to the tip of the tail (total length).

Next week I will give an overview of the season.

W. W. Doak and Sons in Doaktown said we did not get the rain we had expected, but there was a slight raise in water which made the fish more active.  One angler caught a grilse on Monday and two salmon Tuesday morning.  There were fish around and catching was decent, and should stay this way for the closing days.

Derek Munn of Ledges Inn in Doaktown and Mountain Channel in the Rapids area said the little bump in water helped liven things up.  They were picking up a few fish, averaging five to six a day between six to seven anglers.  The water was low, but a good temperature.  There was a good mix of salmon and grilse, with some salmon in the 20-pound range.

Flies of choice were Stone Flies, and green and blue Marabous.

Herb Barry Sr. of Herb’s Fly Shop on the Station Road in Blackville said there were lots of fish around, and some were being caught.  They got a small raise in water, but it was still quite low.  The fish caught tended to favour big salmon, especially hook-bills.

Flies of choice were those with orange such as Alay’s Shrimps. Tippet Shrimps and Orange Squirrel-Tails with orange butts.

Curtis Miramichi River Outfitting in Blackville said they had received about a 4 to 6 inch raise in water, and the temperature was very good.  There were lots of fish around and good numbers were being hooked.  Some salmon in the 20-30 pound range were being hooked.  However, on Tuesday anglers began catching “micro-grilse”.

Flies of choice were mostly dark such as Glitter Bears, Undertakers, Same-Thing-Murrays and Night Hawks, along with some Fall patterns such as Mickey Finns.

Jim Laws of Miramichi Hunting and Fishing in Newcastle, Miramichi reported some fish around, although they were not taking well.  Most local anglers that were out, were in pursuit of striped bass rather than salmon.  The water was low, but cool.

The number of striped bass around was increasing each day as they are returning.  The rest of October should see some decent angling.  Most, however, seemed to be taking bait rather than lures.

Flies of choice were dark patterns such as Shady Ladies, Bear Hairs and a variety of Fall patterns.

Syd Matchett of Trout Brook Fly Shop on the Northwest Miramichi said the water was still very low with only about ½ inch of recorded.  Water temps were good.  A few pools were producing some old fish.  Elaine Gray hooked a 38-inch salmon on the weekend, and Lissa Mallais had a grilse.  Will Doyle picked up two fish on Saturday.

Debbie Norton of Upper Oxbow Outdoor Adventures on the Little Southwest Miramichi said there were fish around, but they were not taking well, probably because they were close to spawning.  However, some were being caught.  Jeff Hall from the Toronto area caught a salmon, Ted Yakush from Trumbull, Connecticut had a salmon and another novice angler from Buffalo, NY had a salmon his first day, two his second and lost one on his third.  Stephanie Elson out-fished all the men with her by landing a big salmon.  Several others also hooked fish, or had them take.

Anglers were also having decent striped bass fishing with the extension of the retention period which lasts until October 31.  Norton said Fisheries Minister Honourable Dominic Leblanc deserves a note of Thanks for being tuned into what is going on.  It is hoped that he will continue listening to anglers’ concerns by coming up with a policy of harvest by quantity for next year.

Flies of choice were Glitter Bears, Copper Killers and Marabous.

So, with some fish around, and beautiful Fall colours, it is a great time to finish off the season “on the water”.

Deals 4 U and Northumberland Timber Mart

Thought for the Week: “Most fishermen use a double haul to throw their casting mistakes further.”  Lefty Krech 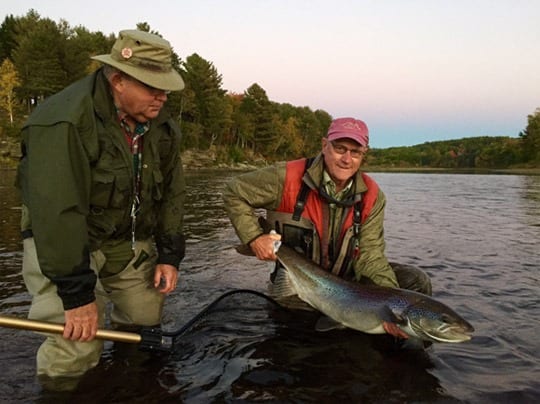 Fall brings with it so many wonderful things, the change in the air, those vibrant colors all along that shoreline and some big beautiful hen salmon! This magnificent example was skillfully handled by a very good friend of mine on the evening of October 5th, topping our scales at 28.7 pounds (in the net) every experienced salmon angler knows that you can fish a long time and still find yourself in want of the good fortune to land such trophy… after this quick photo that lovely girl took off with a wrist yanking thrash leaving behind her some serious prop wash… a memory to last a lifetime… it’s been a great season, looking forward to 2017!

The Minister’s Letter, and the ASF Appeal Submission can be downloaded as PDFs at the bottom of the news item above.
http://asf.ca/minister-rejects-appeal-of-grieg-s-salmon-farm-project.html

The post Miramichi Fishing Report for Thursday, October 13, 2016 appeared first on Giver on the River.