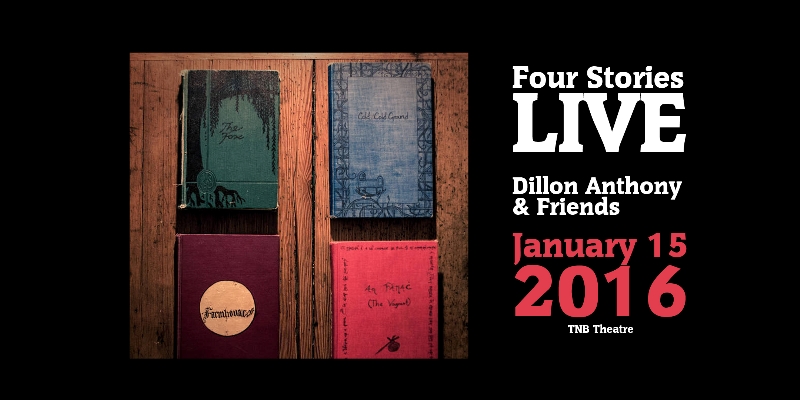 Theatre New Brunswick welcomes Fredericton musician Dillon Anthony for a performance and discussion of the music and lyrics behind his highly-acclaimed debut EP, Four Stories, which was released digitally in July of 2015.

“When a colleague at the theatre first sent me Dillon’s EP online, I was completely mesmerized,” said Artistic Director Thomas Morgan Jones.  “These four songs are perfect pieces of theatre.  They marry storytelling and character equally with dynamic and unique voices, tones, and orchestration.  In the theatre, we often steal from all the other art forms:  dance, music, opera, visual arts, architecture.  As such, when an astonishing piece of music like this arrives, I feel that I have had the most satisfying evening at the theatre.”

Anthony is widely recognised for his skills as a multi-instrumentalist, supporting several Fredericton area musicians live and in the studio.  He is a member of Kill Chicago and often appears on stage backing singer/songwriter Cedric Noel and others.

Four Stories serves as a strong introduction to a lesser known side of Anthony’s creative abilities, highlighting his skills as a poetic lyricist and an accomplished arranger. In addition to Anthony’s own contributions on nearly a dozen instruments including guitar, bass and pedal steel, Four Stories also features guest appearances by a who’s who of musical talent from Fredericton and aboard including Cedric Noel (Sentimentals, Laps), Josh Bravener (The Hypochondriacs), Tim Walker (Grand Theft Bus, Heat and Lights), Alan Jeffries, Michael Feuerstack and many others.

Anthony describes his Four Stories EP as “a collaborative effort that brought to life Four Stories entwined, each of which with a meaning twofold.”

The January 15 performance will mark the live debut of this material and will feature several of the musicians who contributed to the recording.

“What better way to help Dillon bring this music to a live audience, than to place it in a theatre, a place for watching and listening,” said Jones.  “The lights will dim, and we will all get a chance to hear him share his process of writing before hearing all of the four songs played by a band of ten local musicians.  Perfect.”

“I didn’t really have any intentions of playing these songs live until Thomas [Morgan Jones] approached me with some ideas,” said Anthony.  “Once he asked, I definitely wanted to pursue this idea further.  I think these songs will work really well in a theatre environment.”

The performance will take place at TNB’s brand new 98 seat studio theatre located at 55 Whiting Road.  Seating for this event is limited.  Tickets can be reserved online free of charge. A minimum donation of $10 will be accepted at the door. Don’t miss this one of a kind musical performance.