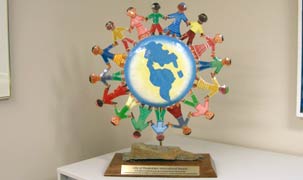 The City of Fredericton has announced that it is accepting nominations for the third annual Intercultural Award. The award “recognizes an individual, group, or business that has demonstrated a sustained commitment and effort to enhance Fredericton’s cultural-diversity and inclusiveness.”

“We are pleased to be able to continue to recognize the contribution of newcomers to our community with this award,” said City of Fredericton Deputy Mayor Eric Megarity, who is also chair of the City’s Ad Hoc Committee on Immigration.

Nominations for the 2015 Intercultural Award will be evaluated based on the following criteria:

The 2014 award went to Charit Khatri. Originally from New Delhi, India, Mr. Khatri moved to Canada to attend UNB. He has since worked with the university to help other foreign students learn about UNB and the experience of living in another country. He has since become an active member of the UNB and Fredericton, and is a Board member with both the Fredericton Chamber of Commerce and Multicultural Association of Fredericton.

Nominations for the award can be submitted by any interested party excluding family of the nominee, and self nominations will not be accepted. For a complete list of award criteria, and to fill out the nomination form, visit the city’s website at www.fredericton.ca and search for Intercultural Awards.