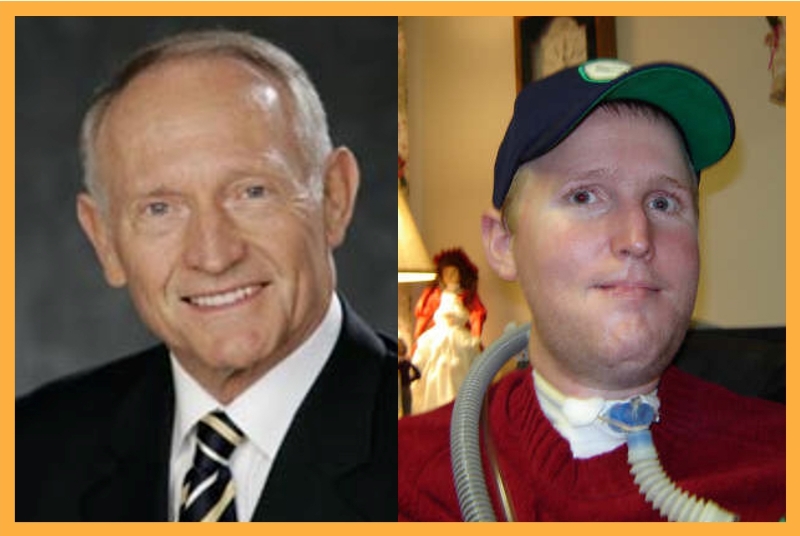 Jim Ross and John Wood have been named the 2016 recipients of the Fredericton Community Foundation’s Philanthropy in Action Awards. They will receive their respective awards at a gala dinner celebration presented by Stewart McKelvey on May 26, 2016 at the Fredericton Inn.

The Philanthropy in Action Award honours members of the Greater Fredericton community who have given of their time, talent and financial resources for the well-being of human kind. This year’s honorees have very different philanthropy stories, yet both have a long history of contributing to worthy causes in greater Fredericton.

John Wood was diagnosed with Duchenne Muscular Dystrophy when he was four years old. He continued to participate in sports as much as he could, but soon became unable to walk and required the use of a wheelchair. This was a very challenging time for Mr. Wood, but with the support of his family and friends, he learned how to stay involved in other ways. As his condition continued to deteriorate over the years, Mr. Wood was faced with countless obstacles in life. Each and every day he needed to overcome barriers to perform even the most basic daily tasks. His struggles continued and at the age of 16, doctors told him that he would need to be ventilated as his lungs were no longer able to breath for him. Life was very difficult for Mr. Wood and his family, but through it all, he continued to push forward.

The perseverance and dedication that John Wood has shown throughout his life has truly been admirable. Today, he is known as a leader in his community and an inspiration for many people with disabilities. He was the first-ever recipient of the Jim Ryan Award which recognizes deserving students who demonstrate dedication and sportsmanship in school activities. His induction into the Oromocto and Area Sports Wall of Fame in 2006 is also proof of his continued participation with many sporting groups in his community. Mr. Wood has been involved in his community for over 20 years and continues to volunteer for many events with Muscular Dystrophy. In addition, he has raised thousands of dollars for the John Wood Foundation, to provide funding for people with significant disabilities in need of financial support.

Mr. Wood gives literally hundreds of hours per year to organizing the annual golf tournament and an annual dinner/auction. He personally solicits donations for prizes and items to sell while leading his team of volunteers in the organization of the events.

The John Wood Foundation has provided over $120,000 in grants. By partnering with government and other organizations and programs, John’s grants have purchased equipment and services for persons with disabilities, valued at over $700,000.

A graduate of UNB law in 1965, Mr. Ross also received an honorary doctor of laws degree in 2007, an honor also bestowed by UNB.

Appointed to the Senate of Canada in 1990, Mr. Ross served almost three years before resigning his seat to begin the task of building Partners for Youth Inc., a provincial non-profit community-based organization that has developed a very pragmatic, highly effective support program for youth and youth at risk. The program targets youth between the ages of 8 and 30 and is founded on the principles of experiential adventure-based counselling.

In 2000, Mr. Ross was awarded the Order of Canada for his work with Partners For Youth Inc. where he continues to provide active support and holds the position of Founder and Chairperson Emeritus. In 2009, Mr. Ross was inducted in the New Brunswick Business Hall of Fame. He is a three-time Rotary Club Paul Harris Award recipient and received the Learning Partnership Champion in Education Award in 2012.

“Philanthropy is about giving of time, talent and treasure to make the world a better place”, notes Bob Scott, Chair of the Fredericton Community Foundation. “Jim Ross and John Wood have come to their charitable giving in very different ways, yet both are shining examples of philanthropy in action. They have been and continue to be influential leaders who have changed our community for the better.”

Tickets for the Philanthropy in Action Awards Dinner, presented by Stewart McKelvey, are $125 each or a table of 8 for $1,000. You can book your tickets today by calling 454-2262.