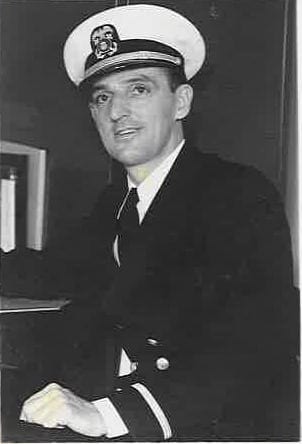 This is a poem about my grandfather, George Martin. He was a Merchant Marine during WWII.

Before we knew, he was the Vaseline Kid
A southpaw, a featherweight, in the Atlantic Fleet
Before that, he sold newspapers on the corner

Slouched in his chair, his teeth in a shot glass
He greeted us after school: Put up ya dukes
He gave us Cokes and Hershey’s Kisses

Not much to look at, a nose a Gibraltar of pulp
Loose fitting skin covered with blurry tattoos
Despite his fragility, he offered safe-passage

Evenings after Cronkite, he fired up his Zippo
Torching the end of a tiparillos, with supper he’d
Tell us a tanker burned forever even as she sank

Striking between No. 4 tank and the pump room
A blessing as ballast put them on an even keel
Something kept those souls within the convoy

He started again: Don’t mess up a lucky break…
With a giant gash amidships, S.B. Hunt listed as
A U-Boat vanished in the deep, its future grave

Steve Herring’s poetry has appeared in Poetry Quarterly and the Aurorean. Steve earned his Master of Arts degree at Northeastern University and taught literature at the United States Military Academy. He’s a New England transplant now living in Arlington, Va.  He enjoys hiking, jazz, and classic films. Steve can be reached by email at herringsteve@hotmail.com

The post Poem: Another Lucky Break appeared first on Giver on the River.

← Province to host national summit for LGBTQ youth
Book Review: “Steal It All” by Chuck Bowie →