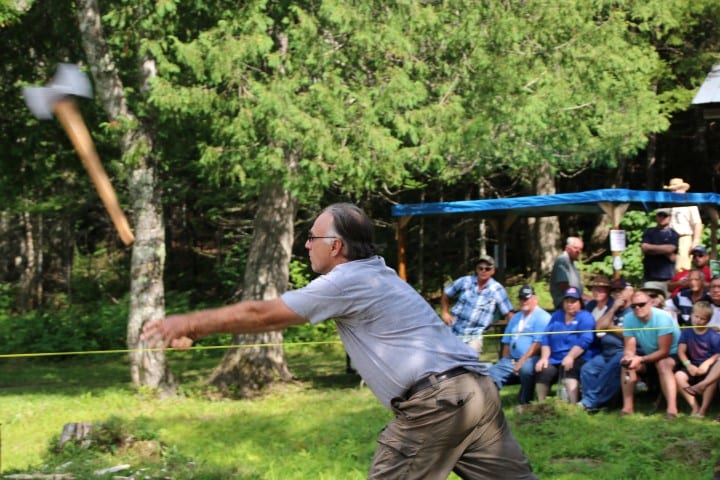 The Central New Brunswick Woodmen’s Museum, located in Boiestown, NB, will be hosting its Annual Professional Lumberjack Competition on Saturday, August 13th, 2016, beginning at 12 noon. TimberSport competitors will be busy sharpening their axes and filing their cross-cuts for this one day Lumberjack Competition; which portrays the “skill and technique” of this amazing Sport. This competition will be Event 7 of 8 sanctioned by the Maritime Lumberjack Association. 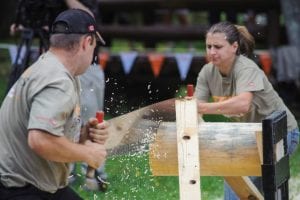 Melanie Bourque of Saint-Paul will be back to defend her 2015 Women’s Title, against the 2015 Canadian Women’s Champion Janet Walker of Truro, NS and past Central New Brunswick Woodmen’s Museum champion Caitlyn Carroll of Truro, NS and newcomer Jenna McCoy of Fredericton. These LumberJills will compete in Underhand Chop, Bowsaw, Stock Saw and Axe Throw. 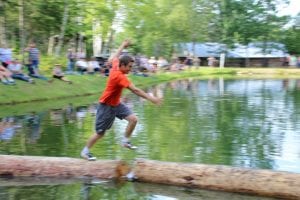 All eyes will be focused on the competition area as the Springboard Chop gets underway. Spectators will be in awe as the first springboard is set in place, the climbing begins, right down to the last chop. The Hot Saw event is always one of the highlights of the day. And, two of the ladies even run Hot Saws. Come watch the girls take on the boys in this NASCAR of the lumberjack world event. The Run-Cut-Split should keep this group on their toes as they endeavour to take the title of Top LumberJack/ Jill.

Don’t forget the Masters Division (the only Masters Division in this Province) as three time champion Paul Woodland of Benton looks to defend his title against Roger McPhee of Petticodiac (MLA HofF), Louis Bourque of Rogersville (future HofF), Marc DesRosier of Hay Settlement (MLA HofF), and Marty Merrill of Williamsburg (MLA HofF) as they show that they can still get it done in the Underhand Chop, Vertical Chop and Bowsaw events.

The competition will end on the Pond where everyone gets a chance to cool off on the Boom Run. But, all eyes will be on 11-year old Alyssa Casey of Bedford, NS who is competing in the 2016 Junior World Log Rolling Championships in Hayward, Wisconsin in July 2016. Alyssa will take on her father, Darren Casey, a Pro-Lumberjack Log Roller.

Come dressed as a lumberjack/ jill and you may win the Best Dressed Lumberjack and Lumberjill Competition. A BBQ will be available on site and a Supper of baked ham, scallop and beans will all be a part of this amazing day of lumberjack competitions. Admission applies at the gate.
Join us for the sounds of the crosscut, chopping, and saws; and, a competition that will keep you sitting on the edge of your seat!