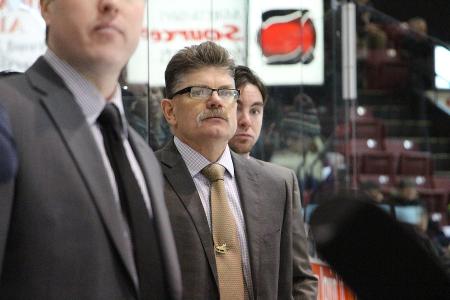 If you ever wanted to learn tricks of the trade from one of the most successful coaches in CIS hockey history, here’s your chance.

The event starts at 7 pm and everyone is welcome: Coaches, players, business operators, parents of players, fans.

“Grit to Great” was the mantra of the Varsity Reds hockey team this past season.

“The Grit concept came out of research by Dr. Angela Duckworth in the educational, military and business world, and we’ve transferred these to the hockey world,” says MacDougall. “During the 2015-16 season, our Grit to Great philosophy proved to be very helpful in us capturing another national championship for UNB Hockey.”

A renowned motivational speaker, MacDougall will be making his third appearance at the Neilson Clinic.

He’ll deliver his presentation at coaching conferences in Camrose, Alberta, and Vancouver, later this summer.

There will be no admission, but Coach MacDougall is hoping those attending will consider a minimum $10 donation to the ‘Chalmers Care for Kids’ campaign, in support of renovations to the Pediatrics Unit at the Doctor Everett Chalmers Hospital.

One Response to Coach Session with Coach MacDougall