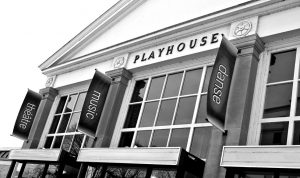 The Fredericton Playhouse, Fredericton’s first choice for live performance, recorded another successful season in 2016-17. While the organization saw increased activity levels and high levels of fundraising and participation in community outreach programs, the facility itself is at capacity and is in a progressively deteriorating state. Playhouse Executive Director Tim Yerxa and Playhouse Board President Susan Holt delivered the non-profit organization’s results in its annual report to Fredericton City Council on Monday. The report showed the Playhouse has had a busy year with 201 days in use, up 14 per cent from the previous season. This usage included 141 performances of 109 different offerings. In total, 50,335 tickets were issued. Highlights from the 2016-17 season included a successful Friends of the Fredericton Playhouse fundraising campaign, which raised $60,000 to support community programs. The Backstage Bash, the Playhouse’s signature fundraising event, was also a success, raising $8,000 for the organization. The Playhouse was also proud of the high levels of participation in its Arts are for Everyone program, which seeks to reduce barriers in participating in the performing arts by working in partnership with local agencies, including the Fredericton Food Centre and the Multicultural Association of Fredericton. In total, 405 individuals were able to attend shows or activities through the program. “We’re pleased to report that we had a successful year,” Holt said. “We continue to see increases in our audience, with nearly a quarter of Fredericton residents attending the Playhouse this past year.” Holt said that 22 per cent of city households held a ticket to a Playhouse event last year. “We’ve seen high levels of satisfaction from our patrons as well – in our recent patron survey, 97 per cent of respondents rated their Playhouse experience very good or excellent.” Although the Fredericton Playhouse operates independently from the City of Fredericton, its mandate to manage and develop the City’s live performance venue is achieved through an operating partnership with the municipality. In his presentation, Yerxa explained that the City’s contribution towards the 53-year-old facility accounts for only 31 per cent of the organization’s budget. “The remainder of our funding comes directly through earned revenues, contributions from individuals, and grants,” he said. Yerxa noted that working toward the creation of a new regional performing arts centre to replace the existing Playhouse remains a top priority. While the facility is being maintained as best as possible, the building is at the end of its useful life. Last year, the City designated the parking lot behind City Hall as the future location of the new performing arts centre. Yerxa said that replacing the current Playhouse is now an urgent concern. “Over the past season, the Playhouse experienced two major heating failures within a six-month period,” he said. “It is impossible to predict when an unplanned shutdown due to a system failure could occur. This project remains a top priority for us and for the community we serve, and in the year ahead we hope to gain greater momentum in moving this project forward.”