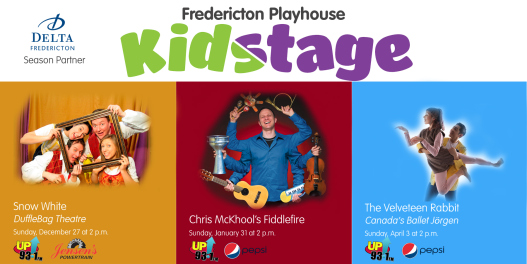 The Fredericton Playhouse launched the 2015-2016 Kidstage Series last month. Designed to capture the imaginations of children, the Kidstage Series is the perfect way to introduce young audiences to the magic of performing arts.This season’s series offers three delightful performances in theatre, music and dance that will allow families to create lasting memories for years to come.

The series began on Sunday, December 27th with DuffleBag Theatre’s Snow White. An annual favourite at the Playhouse, DuffleBag’s fractured fairy tales are full of spontaneous fun and audience involvement. This year, they brought the timeless story of Snow White to life, with lots of hilarious twists along the way. This was the perfect family outing for the post-Christmas stretch.

The Kidstage Series continues in the new year with Chris McKhool’s Fiddlefire coming up on Sunday, January 31st at 2 pm. Violin sensation Chris McKhool will have families dancing, laughing and singing songs. The Juno-winning children’s musical star will introduce his young audience to rare percussion instruments from around the world during this engaging show. Children will enjoy a wide range of musical styles, from jazz and blues to funk and East Coast fiddling.

Finally, the series wraps up on Sunday, April 3rd at 2 pm with The Velveteen Rabbit, performed by internationally acclaimed Canada’s Ballet Jörgen. This show tells the cherished story of a young boy and his love for a stuffed animal that eventually becomes alive. The ballet focuses on the key themes of Margery Williams’ beloved book, including the importance of friendship, love and the discovery of what is real.

For more information about the Kidstage Series and to purchase tickets, visit www.theplayhouse.ca/kidstage-series or contact the box office at 458-8344.

2 Responses to Kidstage Series captures the imagination of children