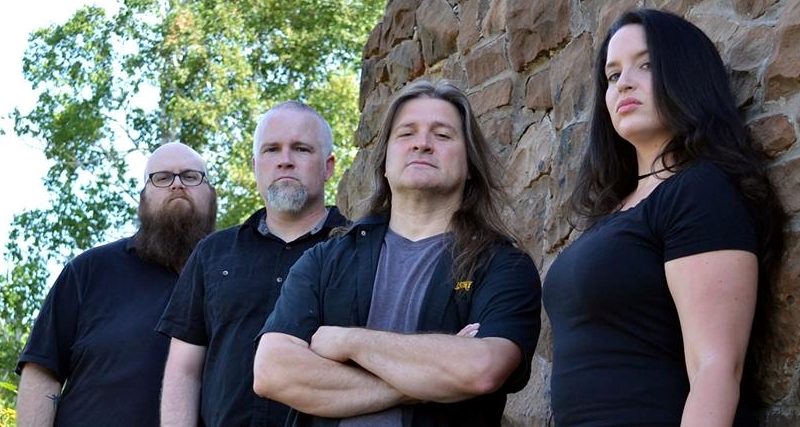 Moncton rockers Shades of Sorrow have released a new video for their song “Parade of Lunatics” off their latest album, Ascension. The video was filmed and produced by Corey Kristensen. Ascension is up for the Loud Recording of the Year at the East Coast Music Awards happening in Sydney, Nova Scotia from April 13th to 17th, 2016.

Shades of Sorrow have been a staple in the music scene in eastern Canada for many years. Their heavy, groovy riffs, catchy melodies, and high energy live show will keep you banging your head for days.

Monise Ouellette (vocals) began singing as a child, taking part in choirs. She started singing in bands as a teenager after a few years of attending Rock Camp in Moncton. Due to an illness in 2001, she took a break from the music scene, although she kept singing and writing on her own. In recent years, she returned to performing, starting with a few local singing competitions, playing in bars with a local cover band, and most recently playing a few solo acoustic shows. She is also part of the vocalists database for the Cirque du Soleil. Her influences vary widely, from Nightwish, Iron Maiden, The Tea Party, Heart, Evanescence, Tori Amos and Aretha Franklin.

Mike Taylor (guitar) hails from the Mighty Miramichi. He spent a few years jamming with local cover bands and performing roadie duties. After trying unsuccessfully to form an original band he moved to Moncton to seek out musicians with similar musical interests and drive. Mike is the primary songwriter for the band and brings the influence of such bands like Metallica, Pantera, Guns N Roses, and Incubus to the music.

Pascal Deslongchamps (drums), originally from Jonquiere, Quebec, has been playing in both cover and original bands throughout Eastern and Central Canada for over 20 years. He played for five years with Heaven’s Cry from Montreal where they opened for such bands as Marillion, Helix and Rik Emmet (Triumph). Besides playing drums Pascal also writes, arranges, produces, and records the music of Shades of Sorrow at his studio, One Eye Cat Studios. His main influences are Queensryche, Metallica, and The Beatles, among others. He is currently a drum teacher at the Music Education Centre in Moncton.

Julien LeBlanc (bass) began playing guitar at the age of seven and bass at the age of 15. His influences range from old school thrash to classic metal to black/ death metal. He gained experience by playing in the black metal band Havengrave for three years. After the demise of Havengrave, he began a long search to find a new band that would be a perfect fit. He joined Shades of Sorrow in October 2010.

For more information or to keep up with band news visit their website at www.shadesofsorrow.ca.

One Response to New Video from Moncton’s Shades of Sorrow