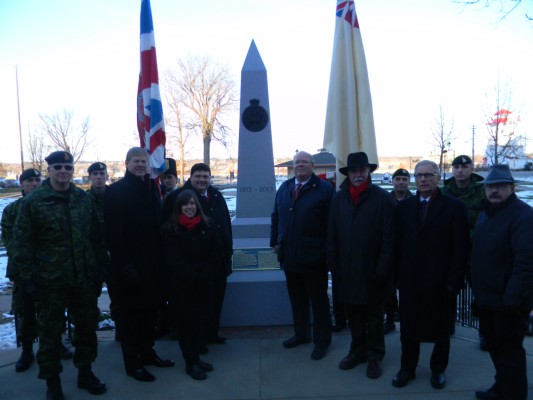 Fredericton is home to a new Provincial Heritage Place after a plaque and monument were unveiled in Officers’ Square commemorating the march of New Brunswick’s 104th Regiment of Foot during the War of 1812. The monument, which was unveiled on December 2, 2014, was erected as part of the Heritage Conservation Act, which allows the to designate significant locations as Provincial Heritage Places.

“I believe that the courage and sacrifice demonstrated 200 years ago by the 104th Regiment should be a source of great pride among New Brunswickers, whose lives continue to be shaped by our collective heritage,” said Tourism, Heritage and Culture Minister Bill Fraser. “The monument in Officers’ Square will serve as a continual reminder of the story of the 104th. Our government is tremendously pleased to be sharing this story for the long-term.”

The New Brunswick 104th Regiment of Foot gathered in Officers’ Square during the War of 1812 before embarking on a 1,100-kilometer journey to Kingston, Ontario. The regiment took part in many of the war’s key battles in that area.

“During the War of 1812, the regiment played a critical role, contributing significantly to the formation of Canada as we now know it,” said Irving, president of Commercial Properties. “Since 2009, Commercial Properties has been proud to support initiatives to recognize the contributions of New Brunswickers, particularly those of the 104th Regiment of Foot, and to share those stories with Canada.”

The unveiling of this monument comes at the end of two years of commemoration organized by the Provincial Committee for the Commemoration of the War of 1812. In addition to this monument, the group has unveiled a plaque recognizing New Brunswick’s role in the battle at Sackets Harbour in New York, the exhibition of the 104th Regimental Colours at the New Brunswick Museum in Saint John as well as the Canadian War Museum in Ottawa, and re-enactments of the March of the 104th Regiment.