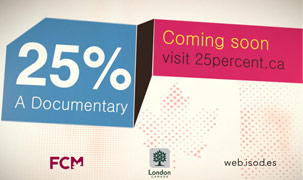 The city of Fredericton has announced the participants of a panel discussion that will follow the premiere screening of “25%”, a documentary encouraging the participation of young women in politics and civil engagement. The event will be free to all and held on Wednesday, October 22, 2014 at 7:00 p.m. at the Fredericton Convention Centre.

After the screening, there will be a panel discussion including:

The discussion will be moderated by Kate Rodgers, Fredericton City Councillor for Ward 11, and will include opportunity for audience participation.

Only 25% of elected officials in Canada are women. This is below the minimum standard for representation by women in democratic governments set by the United Nations at 30%. The UN states “that the active participation of women, on equal terms with men, at all levels of decision-making is essential to the achievement of equality, sustainable development, peace and democracy.”