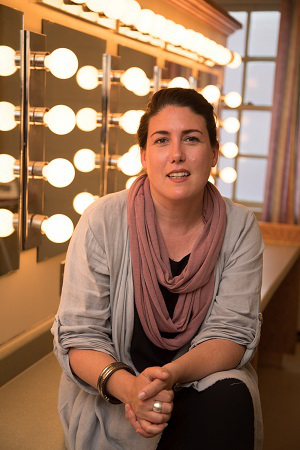 The board of directors of the Fredericton Playhouse is pleased to recognize Tania Breen as the 2018 recipient of The Playhouse Honours.

A brilliant educator, director and performer, Breen has been a vital part of Fredericton’s performing arts community for the past 20 years.

“Tania Breen is synonymous with the performing arts in Fredericton,” says Greg MacFarlane, vice-president of the Fredericton Playhouse board of directors. “From Theatre New Brunswick to Christmas at the Playhouse to The Bricklin, we’re thrilled to publicly recognize the incredible impact she’s made in our community as a performer, director and educator.”

While she’s performed on stages across Atlantic Canada, local audiences will remember Breen as the female lead in The Bricklin: An Automotive Fantasy, a nationally acclaimed co-production between Theatre New Brunswick and the Fredericton Playhouse.

Others may have seen her perform in local bands Dub Antenna and Pretty in Pink or have come to know her in her instrumental role in bringing Christmas at the Playhouse to life over 12 seasons.

Parents and former students alike will tell you that she not only inspired a lifelong appreciation for the arts in the children and youth she worked with – she changed lives.

At the Theatre School, children from kindergarten to grade 12 had a safe space to play, create and explore. While teaching them her craft, she nurtured their self-confidence, work ethic and fostered an acceptance of others.

“It’s an honour to be recognized,” says Breen. “We live in a community that values and supports its artists, and I’m a product of that. It’s really a continuum. This award recognizes the people who came before me and invested in me and the cycle continues with those coming up behind me.”

Breen remains connected to TNB, mentoring a group of new instructors who grew up in the Theatre School and have returned to Fredericton to perform, teach and give back to their communities.

In this next chapter, Breen continues to be an invaluable part of the performing arts community in Fredericton, teaching musical theatre in the fine arts department at St. Thomas University (STU) – her alma mater.

Her career seems to have come full circle as she trains the next generation of performers, directors and educators in the same place that she trained with, previous Playhouse Honours recipient, Ilkay Silk.

Established in 2008, the Playhouse Honours is given to an individual selected by the Fredericton Playhouse board of directors. Generously presented by Atlantic Mediaworks, the program recognizes an individual’s involvement in the performing arts in Fredericton, fostering a deeper appreciation of the value that people can bring to community life through their work in music, theatre, dance, spoken-word and multidisciplinary performing arts.

A permanent display in the west gallery of the Playhouse recognizes the honourees.