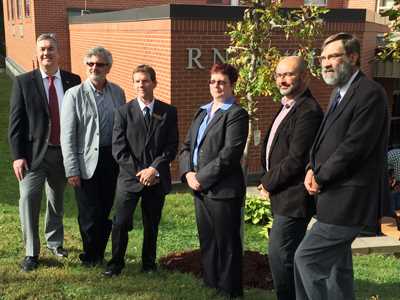 Friends and colleagues paid tribute to Bob Scott, the founder of the Institute of Biomedical Engineering at the University of New Brunswick (UNB), earlier this month at R.N. Scott Hall.

Dr. Scott, a professor emeritus at UNB, died last year at the age of 81.  He was a pioneer in the development of advanced artificial limbs and helped move prosthetic research to where it is today.

He was the first to determine that you could use the electrical signal from a muscle and decode it so it can be used to control a prosthetic limb. Since then, researchers at UNB and across the world have carried on his legacy and used his findings to undertake groundbreaking work.

“Bob’s passion of his work was evident within a few minutes of meeting him,” said UNB President Eddy Campbell, who spoke at the tribute event, which was attended by Dr. Scott’s family, colleagues and patients.

“His clear vision and determination drove his own innovation – he personally developed the control system widely available in myoelectric limbs. That alone is a tremendous legacy, but Bob did far more than that.”

Dr. Scott authored more than 150 publications, and served as a member of the Natural Sciences and Engineering Research Council of Canada. He also held international appointments with the U.S. National Research Council Committee on Prosthetics Research and Development. He played a lead role in the development of the profession of clinical engineering in Canada. For several years, he served on the board of directors of the Stan Cassidy Centre for Rehabilitation in Fredericton.

The institute, established by Dr. Scott in 1965 is now internationally renowned and has housed many of the world’s leading experts in prosthetic limb research.  One of those researchers, Kevin Englehart, who is now the current director of the institute, spoke at the ceremony where a tree was dedicated in Dr. Scott’s memory.

“His tremendous vision and dedication created an institute and a legacy that has impacted many lives,” said Dr. Englehart. “This includes the amputees that have benefited from his pioneering work and the students whose lives have been enriched by his extraordinary mentorship.”

← Rogers Hometown Hockey Comes to Fredericton!
Things to do this Halloween in Fredericton →